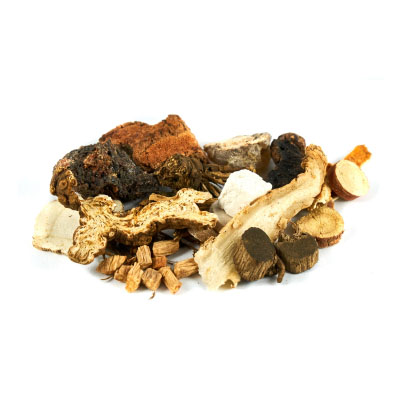 This blend is typically administered to treatBi Zhengproblems, characterised by a full surface and deficiency within the organism. However, the term Bi Zheng has a much wider scope. The blend’s name translates as “A True Warrior’s Strength” or ”Path Relaxation”. The Chinese believe that there are paths in our body where Qi energy flows, similarly to the blood in our vessels. These paths sometimes become blocked. This is the chief mechanism for the occurrence of pain. Blockages can occur for many reasons, often due to bad habitual movements. That’s a different story, though, one which concerns another blend. In case of Bi Zheng, a blockage is typically brought about by an incursion of an external pathogen (most often damp, wind, cold, or heat), meaning that such blockages are caused by fullness, though this fullness is frequently underlined by an internal deficiency (in kidneys’ Yang, for example). The blend’s purpose is to drain the pathogen away and clear the affected path. It’s generally administered to address issues of a chronic nature that often come about as a response to changes in weather. Chill or strong winds tend to be the affliction’s primary causes.