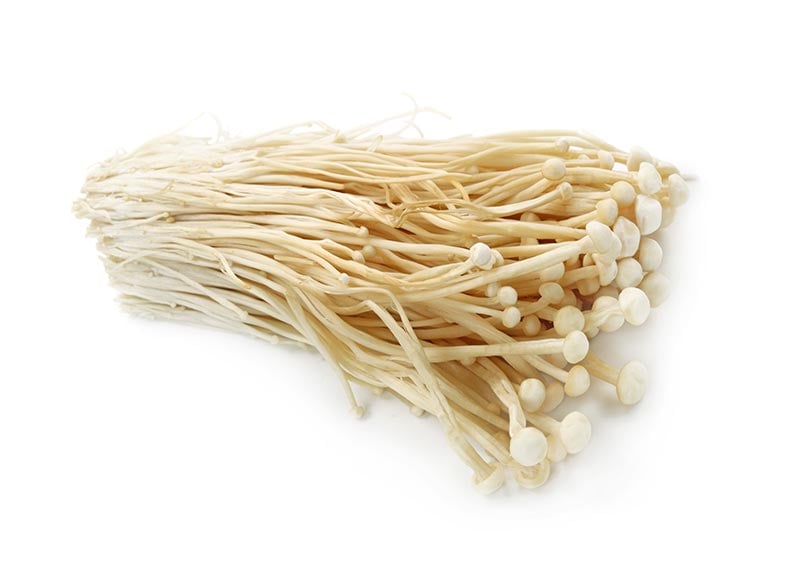 Enoki (Flammulina velutipes, futu mushroom, enokitake, golden needle mushroom) is a popular edible fungus. It grows all over the Northern hemisphere, i.e. it can be found in North America, Asia, or Europe. Furthermore, it’s cultivated commercially, and therefore available all over the world. Enoki is a saprophytic mushroom which grows in clusters by the roots of trees and at the base of tree stumps. It can tolerate low temperatures, even those below zero, and therefore can be picked in winter. It’s also available fresh throughout the year. Enoki mushrooms that grow freely in the wild, and those cultivated artificially differ in appearance only, not in their effects. Free-growing enoki from the wild has a tiny, circular, slightly convex honey-golden cap which is slightly sticky and sits atop a silky stem of about 10 cm. Enoki grown with no access to light is white in colour and has a pointy “under-developed” cap.

Enoki has been used by traditional Chinese medicine for many centuries to treat various diseases. Historical records first mentioned it all the way back in the Han dynasty. Around 900 AD (si shi zuan yao), texts were written which described in detail how to cultivate Enoki and grow it, i.e. how to prepare a suitable growing substrate, water the mushroom, etc.

Enoki was first described for scientific purposes in 1782 by M. A. Curtis who classified it as a member of the Agaricae genus and termed it Agaricus velutipes. The mushroom wasn’t renamed until 1951 when R. Singer moved it to its current group and gave it a new name, i.e. Flammulina velutipes.

Enoki is very tasty and can be used in multiple ways for cooking. It also has a great medical potential which will be explored in more detail elsewhere. Firstly, though, let’s start with the mushroom’s composition.