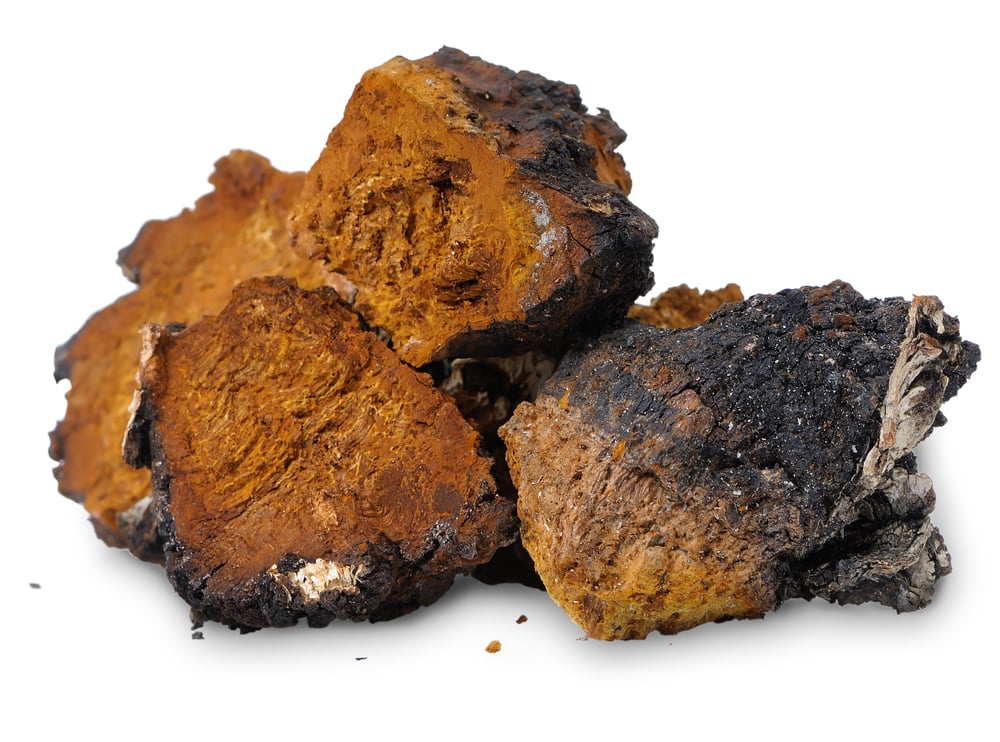 Chaga (Inonotus obliguus, birch mushroom, tschagapilz, Hua Jie Kong Jun) is a wood-decaying fungus. It’s perennial and forms two types of fruiting bodies: sexual and asexual. After infesting a tree, chaga grows dark, blackish “cracked” fruiting bodies whichnbsp;contain chlamydospores, i.e. spores. The fruiting bodies can survive for several years and are 10–35 cm. Later, once the fungus ripens, it grows through the trunk and causes the infected tree to start dying. A second type of fruiting bodies is created, this time with sexual spores – basidiospores. This fruiting body is bigger and can grow up to be up to several metres in size. Chaga mainly parasites on leafy trees, most frequently birches which give it betulin, a vital component with broad-spectrum medicinal effects.

Chaga is widespread throughout the Northern hemisphere. It’s well-known to traditional Russian, as well as Chinese medicine.

A fungus known as early as ca 4,000 years ago, it was used by Mesopotamians, Egyptians, Chinese, etc. Chaga is also described in the Chinese Shen Nong Ben Cao Jing “herbal”. In Russia and Siberia, it’s been used not only for medical purposes, but also as a part of shamanic rituals, especially by Khanty/Oystaks who gave it its current, and most frequently used name. Chaga was on Tsar Vladimir Monomakh’s table, or Rasputin... It’s been also mentioned by Solzhenitsyn in Cancer Ward. Chaga wasn’t unknown to Japan’s indigenous people, i.e. Ainu, either. Ainu brewed chaga tea and drank it to treat their digestive issues, stomach ache, etc. They also used the mushroom in a powder form for religious rituals.

Chaga was also known to the indigenous North Americans.

In modern times, chaga has been studied since 1864 by J. G. N Dragenforff in Saint Petersburg. Mycological research has made significant progress in the 20th century when chaga’s composition was first described and its effects began to be scientifically explored.